Simple and delicious. Those two words always come to mind when describing Rice Krispie treats, one of my long-time favorite desserts. And while I love the process of experimenting and coming up with new and creative cookie, cake and muffin recipes, sometimes I really just crave something simple. And delicious.

I never really thought of Rice Krispie treats as being anything but in their basic form. Until I made Browned Butter Salted Rice Krispie Treats and my whole view on the world was changed forever. Whether it’s a holiday party, summer roofdeck drinks, or “book club” (also known as “no reading wine club”) Rice Krispie treats are my go-to dessert to bring. Because everybody loves them. And because sometimes there aren’t enough hours in the day to get everything done, so a recipe that takes less than 15 minutes to prep and just sits in the fridge to set, is just what we all need sometimes.

Recently, however, I did have a little extra time on my hands to experiment. So I decided to up the ante on my go-to simple and delicious treat. When trying to figure out what flavor combination would be a winner, while not overcomplicating the treat it was easy: chocolate and peanut butter.

Peanut butter and chocolate has been one of my favorite flavor combinations since I was a little kid. It’s actually how I first understood the concept of leverage. I grew up in a neighborhood that was perfect for trick-or-treating. Like so perfect that people would drive their mini-vans full of kids into the neighborhood to trick-or-treat. The best houses gave out the full-size Reese’s Peanut Butter Cups. And if you were polite enough, you might even get an extra or two. Now here’s where the leverage comes in.

At the end of trick-or-treating my brother, sister and I would dump all of our candy on the family room floor to begin the Shaw-kid candy trade. My brother has a severe peanut allergy, which means he had to get rid of all of his peanut-death-candy. And I, his loving sister, was of course always willing to take it off of his hands. For a price. The going rate back in the 90s in Connecticut was 2 full-size Reese’s Peanut Butter Cups for 2 Mini Nestle Crunch Bars. I could also offload any other candy I wasn’t really into on him, and get all of the peanut butter cups because I had the leverage. And then anything gross like Mike and Ike’s or Charleston Chrew we convinced my sister she was winning in the trade (Sorry Kristen). So that’s the long story of how I became a chocolate and peanut butter fan (and how I started building my consulting skills before I was seven).

I think these would actually be really delicious if you just made them with peanut butter and then sprinkled them with a little coarse sea salt on top. But for this recipe I was really craving chocolate, so I melted some semi-sweet chocolate to top them with. And I had a half bag of Heath toffee bits in my magic baking drawer, so decided to sprinkle some of those on top while the chocolate was still wet for an added crunch.

I shipped these off to my friend Carolyn, one of my long-time loyal taste testers. One thing that Rice Krispie treats are definitely good for is easy transportation. Whether you’re shipping these in the mail, leaving them outside for a summer picnic, or just throwing them in your bag to bring somewhere, they hold up really well.

So if you want to whip up a simple and delicious crowd-pleasing treat, bring a batch of these Chocolate Peanut Butter Rice Krispie treats to your next event!

A peanut butter and chocolate twist on the classic Rice Krispie treat. 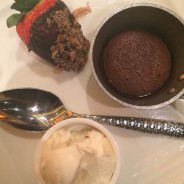