TGICD. Honestly, sometimes I think I am so caught up in my regular work routine that I think if I had a weekday off I wouldn’t know what to do with myself. Usually when we have these floating holidays at work like President’s Day and MLK Day and Columbus Day, I like to go into work on those days because there are usually a lot less meetings so you actually have time to get things done. But I decided to celebrate Nina, Pinta and the Santa Maria today by observing Columbus Day on it’s actual day. And you know what, being off the regular weekday schedule is fantastic. First, I woke up at 7:30am (that’s called sleeping in as a grown-up). I actually took the time to eat a well-balanced home-cooked breakfast FROM the kitchen table (not the normal curling iron in one hand, smoothie in another). Went to Crossfit at 11am, ran errands, got my nails did, caught up on Homeland, AND found a good use for the giant bowl of apples that was staring me down from the counter.It’s 7pm and I still haven’t put real pants on at all today. Honestly, if some sugar daddy feels so inclined to wife me up tomorrow and let me be a stay-at-home whatever, sign me up.

So, given that I had some actual time to relax today, I decided it was time for some good ol’ fashion baking experiments. Since it’s apple season, I’ve been stocking up on gala apples which are my favorite kind, but then I keep forgetting that I bring them to work for a snack and now I have this giant bowl of uneaten apples. As a kid, apples and peanut butter was my favorite snack. Not in a healthy way, mind you. But with a side of brown sugar for dipping. Oh yes. It’s delicious. I had this awesome babysitter growing up, Tina. Tina lived across the street, taught me how to color inside the lines (important life skill) and make birds nests out of grass clippings (a less important life skill, but still, valuable) and used to make apples, peanut butter and brown sugar as our snack. (This is my I love sugar so much face circa 1988).  I also had this best friend in the neighborhood, Ashley, who I hung out with a lot and also had been babysat by Tina. So Ashley and I obviously became bffers because of our love for riding bikes and dipping fruit into sugar. Once in third grade her mom tried to convince me to wear her brothers boots when it was snowing and I was obviously too cool for that and I went outside in my sneakers, slipped and broke my arm. One thing I will always remember aside from knowing never to defy Ashley’s mom’s recommendation ever again, is that she was a great baker. Not in a “let me whip you up a meringue” kind of way. But she always had these simple recipes that were huge crowd pleasers – like the white trash, which is one of my favorite go-to party recipes. Anyway, I digress down memory lane. The point of time traveling back to Connecticut in the 90s is to just drop some knowledge that if you add a tablespoon (or maybe more, if no one is looking) next to your peanut butter, then dip the apple in the peanut butter, and brown sugar, and take a bite – it will blow ya friggin mind. Guaranteed. Unfortunately, kids these days are probably eating organic raw kale hummus with carrots, so they won’t be allowed this life pleasure. But the nice part of being a grown ass lady, is I can still eat this as a snack like it ain’t no thang.

So I got to thinking. How do I bake this into something that is just as delicious as my favorite childhood snack. There are plenty of apple with brown sugar and oat recipes, but the peanut butter is the key. So I just decided to wing it. And holy bananas, this is even better than the real thing. I made a peanut butter oat crumble, which half was used for the crust, then I chopped up some apples and let them get all happy in some brown sugar and cinnamon, and then topped it with the rest of that PB crumble goodness. It makes me want to put on some rollerblades and get Caitlin, Christina and Ashley (my old neighborhood posse) back together for snack time.

Step 1: Preheat the oven to 375 degrees. In a small saucepan melt the butter over a low heat. Once butter is melted, whisk in the peanut butter until it is melted, and set aside to cool.

Step 2: In a large bowl, mix together the sugars, flour, oats, baking soda and salt with a large wooden spoon. Slowly mix in the melted peanut butter and stir until the flour is all dissolved and ingredients are mixed well. Line a 13×9 glass baking dish with parchment paper and spray with nonstick spray. Spread half of the crumble evenly in the bottom of the dish and put in the oven for 10 minutes while you are making the filling.

Step 3: Chop the apples into about 1/2 inch cubes. In a separate bowl, coat the apples with sugar, flour, cornstarch, cinnamon and lemon juice. Fold with a spatula until the flour is all dissolved and the apples are evenly coated.

Step 5: Take the remaining crumble and evenly sprinkle it over the apple layer. Bake at 375 degrees for about 40-45 minutes, or until the crust is golden. Halfway through baking, I rotate the dish in the oven to make sure everything is evenly hit with the heat. When these are done, let them cool for a few hours at room temperature, OR just dig in hot. I mean really, why not right? They smell UNREAL. I put mine in the fridge to chill for a few hours after they came out of the oven so that I could slice them tonight.

Honestly. I know that I just watched Fed Up and I’m supposed to think sugar is the devil, but you HAVE to make these this fall. The apple, peanut butter and brown sugar combination is just so so so delicious and perfect. And its like angels singing, and Shaquille O’Neill in a genie costume and the Fresh Prince rapping in West Philadelphia and all of the beautiful combinations in life. That is the best way I can describe this dessert. So just trust me on this. I have come a long way since the third-grader who chose fashion over function and broke my arm (and a year later faked not being able to see because I wanted glasses that the doctors knew I was lying.) I’m not lying. Make these.

Okay, so let’s see what’s new from this past week. Wednesday was my 7-year consulting anniversary, which is an accomplishment to have survived this many years of leveraging synergestic buzzwords and not boiling the ocean (also, 7 years in consulting is like 49 years of working in a regular industry job.) My brother sent me the new Thug Kitchen cookbook which I was really excited to get in the mail on Friday. My only disappointment when reading it, is that I didn’t think to start this blog myself and write the ghettoest and most hilarious recipes ever. Given my upbringing in southern Connecticut – aka “da hood” – straight thuggin comes naturally to me.

My bestie from home Katie came up Friday night and we did some shopping around the city on the rainy Saturday. And in true best-friend fashion, we pretended during the day that we’d be interested/have energy to go out at night, and ordered takeout at 8pm and rented a Zac Efron movie. (because really, without saying words outloud, we had agreed upon this plan well in advance.)

Sunday morning I got up early and did what all normal 29-year olds do on Sunday — I went to the casino. Because you know who loves the casino? Grandpa. And I love to continue to secure my favorite grandchild spot by surprising him every now and then, so I sat next to him at a slot machine and started talking in my most obnoxious “bahhston” accent until he realized it was me. And then we had a nice lunch together at the Italian restaurant and I show him all the pics on my iphone of what I’m doing with my life, and it’s cool that even though he lives in Connecticut, he is still very up-to-date with all my life happenings up in Boston.

And I really never thought I’d be one of “those people” who got all addicted to Crossfit … and I’m not there yet, but I will say, don’t knock it till you try it. I’m still the slowest in most of the classes I take, but I’m definitely getting a good butt-kicking workout, I’ve met some fun new friends, and I’m being physically and mentally challenged on a regular basis, which is a good thing. Though today I was pretty sure I was gonna vom that beautiful handmade breakfast all over myself mid-burpee, but I powered through.

Heading to Texas this weekend to be reunited with one of my favorite college friends Denise! I used my extreme couponing skillz and got myself a free flight to meet Denise in Houston and then we are road tripping to Austin for the weekend. Expect lots of BBQ and other eating for the insta action on Instagram this weekend, y’all! In the words of Tim Riggins, Texas Forever. 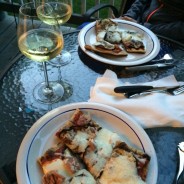