I got it, I got it. I’m a week late with this post. But better late than never right? And don’t you worry. These cookies were literally inhaled by my coworkers Tuesday morning in less than 20 minutes. Animals. I work with animals.  So here is the story behind the delay. Last Saturday I ran a 5k for the Samaritans, which is an organization for suicide prevention and support. So as a way to raise some additional money for my run I had offered that anyone who donated to my team would get cookies shipped to them. Which led to me raising $895. Which was really amazing. So after running the 5k and then competing in a tennis match a few hours later, I spent my weekend baking 300 cookies. That’s a lot of dough (ba da ba boom cha). Which I delivered to my friends in Boston and shipped out 14 boxes from Chicago to Connecticut to Houston to Florida and Virginia.

Oh, and I had bronchitis (don’t worry, no cookies were infected. not that I think that would have stopped some coworkers from eating them). So needless to say by the time Sunday night came around, I was just not in the mood to make any more cookies. But I made the mistake of showing up to work cookie-less on Monday. And received about 10 emails and pings asking where the cookie email was, if they were taken off the coveted cookie list (I’ve created monsters). Apparently a case of bronchitis and baking 300 cookies for charity wasn’t a good excuse, so Monday night I decided to whip up some cookies quickly. I had a bag of frozen mini Reese’s in the freezer which I was slowly crushing. Reese’s are crack cocaine to me. If I knew the secret formula, I’d set up a Reese’s lab in an RV in a dessert somewhere and cook Reese’s to sell to addicts and dealers. Wait. Nevermind. I’ve been watching too much Breaking Bad on Netflix.

Step 1: Preheat the oven to 350 degrees. Cream together butter, sugars and peanut butter.

Step 2: Add in egg and vanilla and mix well.

Step 3: Add in the dry ingredients and mix until well incorporated.

Step 5: When the cookies come out of the oven and are still hot, gently press a mini Reese’s cup into the cookie. Let these cool in the pan before removing.

So Tuesday morning I had to work from home in the morning while I waited for my new couches to be delivered. So I came into work around 12:15 and sent out the Cookie Distribution List email that I had cookies at my desk. I kid you not, the cookie addicts were at my desk and all of the cookies were gone by 12:30. Which then led to even more disappointment to those coworkers who didn’t make it down in time. So I am currently baking up a big batch of fall cookies right now so that none of my coworkers suffer from sugar withdrawal tomorrow.

Now normally I do not acknowledge any of the photos that get taken of me during 5Ks since they always manage to get me in the absolute worst moment, where my face is like tomato red, my eyes are shut, and my feet are not far enough off the ground to make it believable that I am actually running. But I thought this one was cute since Colleen and I decided to run side by side during the race. Oh, did I mention we dress identical without trying not apparently? 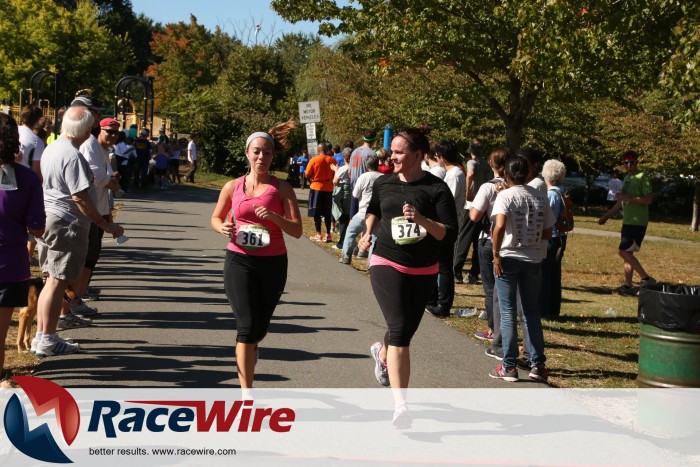 Now I realize that getting excited over furniture is not cool, but I was really excited for these couches to finally arrive. I ordered them back in the summer for Tax Free weekend and they took forever to get here, but now I feel like a real grown up since these are no longer hand-me-down couches. And don’t worry about the light color. (its not white, it’s oatmeal). There will be no eating or sitting on this couch with jeans. We’ve spent the weekend doing the very tedious job of breaking in the couches while watching TV. Tough life, but someone’s gotta do it.