The heat has me beat tonight. Given that Friday was rain-soaked, I made the most of the nice weather today and spent as much of it outside as possible. And I have the awkward-shaped sunburn on my legs from sitting on a roofdeck to prove it. I was down the Cape on Saturday and had lunch with my parents at a great little restaurant in Brewster called The Marshside. I always have my eyes open for new cookie inspiration, and when we walked into the restaurant yesterday they had freshly baked Peach Pecan muffins sitting at the hostess stand that smelled amazing. And while I know baking cookies with fresh fruit can be challenging, we all know how I like a good challenge. So I bought some peaches and just modified my basic oatmeal cookie to create these refreshingly delicious cookies.

Step 1: Preheat the oven to 350 degrees. Cream together butter and sugars. Add in eggs and vanilla and mix well.

Step 2: Sift together the flour, baking soda, cinnamon and salt and add into the wet mixture. Add in the oats.

Step 3: Add in 1 cup of toasted pecans. I was a bit lazy and just bought these glazed pecans and used those.

Step 4: Peel, core and dice the peaches. I would probably cut them a bit smaller next time around. I cut up about 2 cups of fresh peaches. Add into the mixture and just mix until the peaches are evenly incorporated. I had to fold some in with a spatula at the end.

Step 5: Using a cookie scoop, place evenly-sized balls of dough on a sil-pat or parchment-lined baking sheet. Bake at 350 degrees for about 10 minutes or until lightly golden brown. You might need a minute or two extra with these because of the peaches.

Yep. Nailed it. My condo smells just like the bakery yesterday. I love peach cobbler, and these cookies taste like peach cobbler in a cookie. The pecans are a nice crunchy touch for making the cookies not too soft. I think I’ll definitely be making a cherry and blueberry version of these at some point this summer. We all had to move desks on Friday at work, so let’s hope the cookie distribution goes well tomorrow morning since I now sit on the other side of the office.

I was all over the place this weekend. I was down the Cape Thursday night, and with the monsoon on Friday I decided to live it up like all single twenty-somethings …. by going to see a matinee showing of The Internship with my parents and a theater filled with early-bird special 80-year-olds. The movie was hilarious. So then we rented This Is 40 from Redbox, which was also hilarious. Including the part where my mom dropped her credit card under the Redbox machine and we made the nights of some Stop and Shop employees who helped to retrieve it. Nothing says “clorox yourself” like laying on the floor of Stop and Shop on a Friday night. (again, why am I not dating anyone???) Frankie at least enjoys early morning belly rubs. Tough life.

And obviously because it wouldn’t be a Sunday Funday without a trip to my favorite store, I threw some more money at Home Depot today and bought some fun things for the backyard. A cordless weed wacker, which I will probably slice my legs open using this summer. And then some flowers and grass seed, which I planted after mowing the lawn. I think it’s time to update my online dating profile: Loves Home Depot, uses a lawn mower regularly like a boss, doesn’t mind getting dirty … planting flowers, and knows how to till the ground before you put grass seed down. Get in line boys.

So when I got home, I took the flowers through the side alley instead of treking the dirt in the house. I noticed that some animal had eaten through a bag of trash and it was scattered all over the alley. The recycle bins and trash bin were also full of water from the rain storm. So I went to dump the water from the recycling bin in the street when I screamed bloody murder (you shouldn’t do that in Southie, by the way), but a DEAD OPOSSUM came out of the recycling bin. Apparently he drowned after ripping through my trash. And then he was just there, in the middle of them street. Beady eyes still open. So after I was able to breathe again, I planted these flowers near our newly planted trees. I’d say it’s looking pretty good. (minus the brown spots in the grass)

I’ll leave you with this. I got two cards ont he same day last week from my mom and one of my best friends Sarah from college. They know me too well. 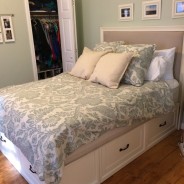